Hiya Folks / Re: Hey Everyone!

Play Sonic Unleashed or Generations. It's really fast and we need more runners. If you'd like to learn how to run them there's a Skype group that worships Josh and also knows how to go fast
2

Beef / THERE IS EVIL IN THIS SITE. BROTHERS, FIGHT BACK NOW! 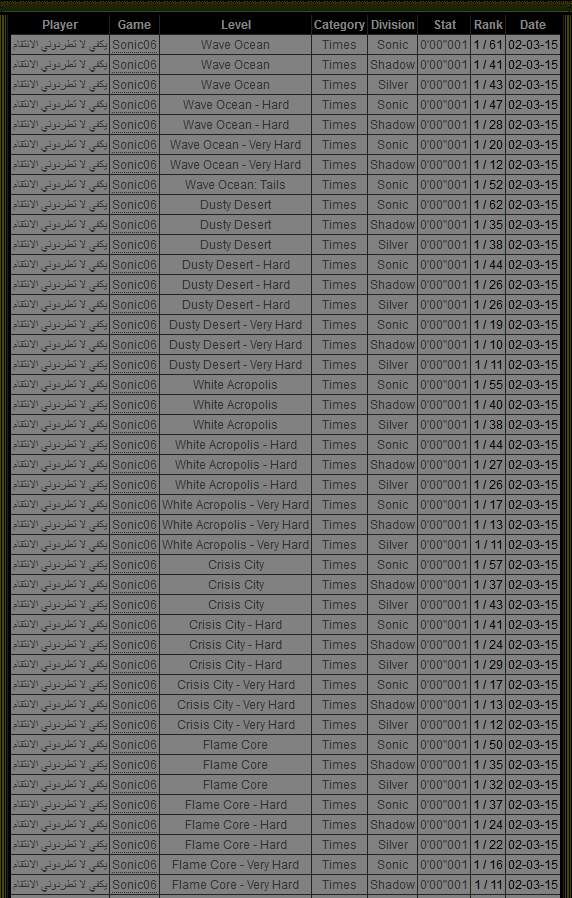 In the early hours of last night a god made flesh posted the best times this site has ever seen. Obviously afraid of losing his TSC Championship won through a campaign of intimidation and banishing all dissenters to the shadow realm, DsS aka Da1AndOnlyShadow (named so because he's evil, just like Shadow), flexed his clout around the site and promptly had the honorable speedrunner banned, citing "this isn't possible," "he's cheating," and "damn son he got bopped." THAT EVIL F***ER HAS THE GALL TO BAN SOMEONE FROM THIS SITE JUST BECAUSE THEIR TIMES ARE BETTER!!?!??!? I for one will not stand for this and as I type this out I am contacting my secret network of spies around the country to uproot the EVIL infested in this site. If you do not comply with my list of demands my secret network of spies will unleash a hell the likes of which you have never seen before. All your HTTPS will unravel, Sonic's arms will be painted blue, and the forum will become a toilet bowl.

My Demands are as Follows:
1. The head of Sonic Center EVIL MASTERMIND DsS, or at least a disc of some game he cares about broken or made missing
2. The EVIL CABAL of the MHC disbanded AT ONCE and all members to be put on trial in a Court of Law (or in Werster's case, a deathmatch with boomerangs against Tony Blair because I think that's how the legal system works in Australia)
3. More emotes. I am autistic and can only converse in Kappas and OpieOPs and it is not fair to discriminate against people like me
4. Everyone becoming a record holder in some arbitrary category nobody cares about, like "Best time in the snowboard section of Ice Cap" or "Sonic and the Secret Rings championship"
3

Wikkity! / Re: FINAL TOPIC! Topic 14 - What Sonic Character matches you?

Wikkity! / Re: Topic 6 - What's your favorite soundtrack from a Sonic game?

« on: January 01, 2015, 02:45:01 pm »
A tie between Unleashed Day, Classic, and Modern Rooftop Run (though I'm slightly biased towards Modern), and Jungle Joyride Day. Rooftop Run's upbeat blend of guitar, violins, piano, and drums is pure ear sex. Jungle Joyride Day is a fantastic take on traditional Thai music. Using traditional instruments like glongs, pis, and khluis, the composer creates a techno jungle beat.
Coincidently, I love the visual aesthetics of both stages and how they play.
5

« on: January 01, 2015, 02:21:28 pm »
Eggman. He's a very fun antagonist to watch and I love that his schemes are almost always so half-baked that he ultimately ends up as the secondary villain. He's most entertaining in Colors and Generations in my opinion
6

That being said, I'd be interested in watching it. TSC is probably the best place to coordinate such a project given the knowledge base, though I'm not entirely sure what the end goal is. Are you just doing RAs in a single sitting or are you stitching together a bunch of ILs?
8

Wikkity! / Re: Topic 7 - What do you hope you'll get for Christmas tomorrow?

Since Future Games are a Thing:

AoM is a sick speedgame because of the mission and unit variety. This might be of interest to you: https://forum.speeddemosarchive.com/post/age_of_mythology_available_for_verification_2014.11.16.html

I want to believe is like Starcraft 2. I saw a Brutal difficulty Single Segment and IL runs. It must be something like that

Kinda? Starcraft 2 is all about the efficiency and micro. AoM relies on funny strats to go fast. There's also a fairly decent amount of glitches with triggers. They're both RTSs so the general macro is similar
11

Since Future Games are a Thing:

AoM is a sick speedgame because of the mission and unit variety. This might be of interest to you: https://forum.speeddemosarchive.com/post/age_of_mythology_available_for_verification_2014.11.16.html
12

Wikkity! / Re: What level in any Sonic game have you played more than any other?

I was diagnosed as mildly autistic some years ago, and still am to some degree. No offense taken though. I'm not exactly sure how to properly use the word either. In one sense, I guess everyone can be a little bit autistic at times -- getting super obsessed with something and liking it.

I have mild Aspergers/ASD/whatever they call it now; I just like the word because it's a generic ironic insult that can mean anything from being good at something to being awkward
13

« on: December 21, 2014, 06:46:38 pm »
Time Attacks. For me Sonic games have always been about being rewarded with speed for knowing the routes for each stage. The better you play and the more you play the faster you go. Ring is pretty lame but I understand the appeal of knowing everything about a stage, bosses have traditionally been awful in Sonic games outside of the Rush series and duel-styled fights (Shadow/Sonic 2 in SA2, Blaze/Sonic in Rush, etc.). Extra is a meme category
14

Wikkity! / Re: What level in any Sonic game have you played more than any other?

Wikkity! / Re: What's your CRAZIEST run on TSC?

« on: December 21, 2014, 04:00:21 pm »
Definitely my Rooftop Run Modern Time Attack 1:37.72. Its a realky technical run that abuses M-Speed like crazy and is a culmination of 3 years and 200 hours of routing, strat finding, and attempts. I got the run on stream and you can hear how nervous I was after getting a hard trick I've only gotten 10 times or so and how hype I got after I ht the goal ring. For a whille it help both the skills and time attack records.
17

« on: December 12, 2014, 08:59:31 am »
-Learn Unleashed All Day Stages
-Lower Rooftop Run Modern in Generations by a second
-Finally Learn Crisis City Modern
-Finally get a good run in Planet Wisp Modern
-Get a really good time in Jungle Joyride 1
18

Competition Central / Re: Your Personal Best Stat on TSC

« on: December 12, 2014, 07:09:44 am »
http://www.soniccenter.org/rankings/sonic_generations/time_attack/rooftop_run/modern
I'm confident that I'm the only person who can beat my time on this level
19

« on: October 21, 2014, 03:34:57 am »
For some reason the Sonic fanbase draws in some people who are absolutely bonkers. It's easy to meet these people online (hell, TSC has a lot of these people) but have you ever met any people who were really into Sonic in real life?

I've met two. Back at my boarding school (therapeutic so the kids were already kinda nuts) we had two kids who were really weird, even for that place. Justin and Hunter. These kids were on each other like white on rice. They never left each others' side. The first thing that you would notice about these kids is that they were Sonic the Hedgehog fans. Not the standard "liked the game as a kid" fans. Oh no. For these guys Sonic was a work that trounced the literary works of Tolkien and the plays of Shakespeare. Justin cried when Sonic 06 came out and he wasn't able to play it because our dorms didn't allow consoles. They talked about the franchise nonstop and a lot of their conversations were just quoting from the 3D Sonic. They had this dynamic roleplay going on where Justin would pretend he was Sonic and Hunter Tails (though later when they had a big fight Hunter decided he was Shadow and they would get into fist fights all the time). They'd do a bunch of stupid shit such as pretending they were characters in a new Sonic game that usually ended with one or both getting put into a therapeutic hold which is just a nice word for a locking tackle. Honestly neither was that bad alone but combined their polarity created a singularity of spergdom.
20

Wikkity! / Re: The anime thread

Wikkity! / Re: How you came up with your username! D*ng dude, that's a bummer. I never really branched out from playing Generations, but race nights were always there to motivate me to do so someday. I understand that there are only so many games that can be raced, but could these return someday as a monthly thing instead to keep the games list from going stale?
26

« on: August 28, 2014, 05:13:06 pm »
So now that we're all acquainted with each other and I have a better understanding of 3D space, what are you hoping to see come out of Sonic Boom that would make it a passable speedrun outside of the general lack of playtesting you come to expect from most Sonic games?
28